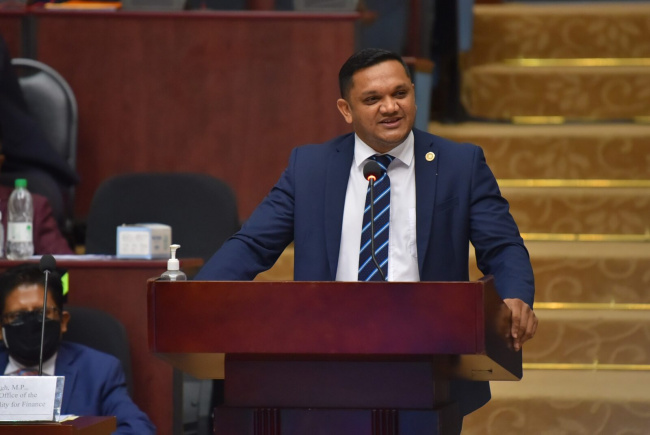 (DPI) The National Assembly passed the Petroleum Exploration and Production (Amendment) Bill during the 31st Sitting of the 12th Parliament on Monday.

Minister of Natural Resources, Vickram Bharrat, MP, says the Bill will paves the way for the Government’s gas-to-shore energy project.

This, he said, is one of the most important projects for development, and will ensure that every Guyanese benefit from the oil and gas sector.

The Minister said the project is expected to see the cost of energy reduced by 50 per cent, as the current costs of energy generation is prohibitive.

“Mr. Speaker, besides reduction in energy cost and in our light bills as we would commonly say, the gas-to-energy project will reduce the power outages that we have been experiencing over a number of years.”

Minister Bharat said the reduction in energy costs will put money back into people’s pockets.

“It is no secret that with the reduction of power, cost of living in Guyana would reduce significantly, and this is something we have been grappling with for years and more so during a global pandemic.”

The Bill amended Section 52 of the Petroleum (Exploration and Production) Act, Chapter 65:04. This section deals with restrictions on rights of licensees and surface rights. It also makes amendments which speak to work done by a petroleum licensee, in aid of its operations on State land, Government land, or land otherwise controlled or under the management of the Government of Guyana.

It allows the Minister to grant permission to the licensee to land, install or operate any pipelines or submarine, fibre optic cable or terrestrial cables or similar infrastructure.

Several members of Government voiced their support for the Bill which was debated for over four hours in the National Assembly before being read for the third time and passed.

January 13, 2021 - The Legal Department of Guyana’s Ministry of Natural Resources is currently examining the Petroleum Commission bill to include several changes that were suggested by the new government.