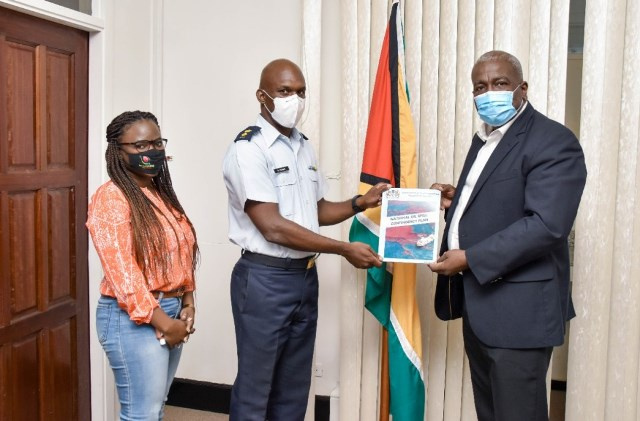 (DPI) Guyana has taken a robust approach to protect its people and valuable resources from all threats of oil pollution, through the establishment of a National Oil Spill Contingency Plan.

The country’s new oil and gas industry has opened doors to vast economic transformation. While the Government looks forward to the economic boom and positive changes from oil production, it is equally concerned about the safety of its people and natural resources.

The Civil Defence Commission (CDC) recently completed the National Oil Spill Contingency Plan, which gives immediate operational response to any event of spillage of oil and petroleum products into the environment.

The emergency plan satisfies requirements under domestic legislation and policies, as well as international conventions.

In the event of an oil spill in Guyana, all relevant Government agencies, oil and shipping companies and other relevant parties will be required to follow the procedures established in the plan.

The 132-page document provides an appropriate system for the monitoring, detecting, and reporting of oil and petroleum spills on land and maritime environment, co-ordinates scientific support and analyses to determine priority/sensitivity ratings of impacted or threatened areas and protects public health, welfare and natural resources in order to minimise environmental and economic impact.

It has also established a reporting procedure which will provide information to all relevant national and international stakeholders, and has outlined procedures and implementation mechanisms for immediate response to obtain regional and/or international support.

In his policy statement, Prime Minister Hon. Brigadier (ret’d) Mark Phillips, said the Government is aware of the need to preserve and protect the environment from all chemicals that pose a danger to the health of humans and other lives.

“The Government of Guyana sees the importance of developing measures that can aid in the prevention, and if unavoidable, prompt and effective action to minimise the damage which may result from a major oil spill incident. The Government sees the need for the inclusion of every stakeholder, including the oil and shipping industries, in preparatory efforts and actions for these contingencies.”

The plan accounts for oil and petroleum products entering Guyana’s territorial waters from spills which occur in neighbouring states.

It comes at a time when Guyana has recognised a potential threat from an oil spill from the FSO Nabarima listing with 173,000 tons of oil cargo off the coasts of Venezuela and Trinidad and Tobago in the Gulf of Paria.

The CDC said Tuesday that there were no probable threats from the spill.

“The prognosis does not show any direct impact on Guyana’s shores or marine ecosystem from any releases happening. Indirectly, it may affect fisherfolk who are licensed to operate in surrounding waters off the coast of Venezuela and Trinidad and Tobago,” the release stated.

While there are no reports of any spills, CDC said it is concerned that should the contents be discharged, it could become a major disaster to Caribbean countries.